Building automation and the strategic role of Integrators

Food and beverage industries have followed through time different policies confronting the necessity of a CIP system. Initially, regulatory mandates where formed and EC Directives were issued undertaking the role of the base for allowing inspection of conformity to the essential requirements of high level hygiene in the production environment. After a long period of harmonization trials food processing companies show evidence of CIP usage appreciation, as they start to consider such a cleaning unit as a non-extractable cornerstone in the foundation of the production line.

The common mistake that industries make during the chase of achieving higher quality products and longer shelf life, is that they focus on production machinery and network equipment, excluding the CIP system. Precluding the cleaning parameter and degrading the importance of it can lead to serious malfunctioning and financial loss. The CIP unit should be considered as an important element of the production process and thus one of the most effective spearheads of the industry’s artillery at the battle against fouling and product contamination.

This holistic approach has been enhanced due to the fact that industries have realized that a proper functioning CIP system offers a return on investment in cost savings as well as in the extension of product shelf life. Higher cleaning efficiency leads to better hygienic conditions and subsequently to shorter downtimes between product runs.

Community Directives have proved not only to impede any risks arising out of the design and construction of food machinery but also acted as the base for better studying, measuring and in-depth understanding of the cleaning mechanisms. In following this method and at the pursuit of optimizing the CIP performance, predictive growth and inactivation models have been used in order to manipulate production data and determine microorganism growth rates, temperature and cleaning agents’ impact. The collection of such information can help discover any process bottlenecks and thus propose actions for fouling confrontation.

Most importantly, a successfully enforced CIP unit relies on the optimal controlling of the parameters of the extended Sinner circle. According to this model, the cleaning effectiveness is influenced differently by the product type, the time, the chemicals, the mechanics, the temperature and the plant design. These six variables interact with different percent gravity in each case, so a CIP fine-tuning in situ is essential to be carried out by experts who will handle each application with different perspective. 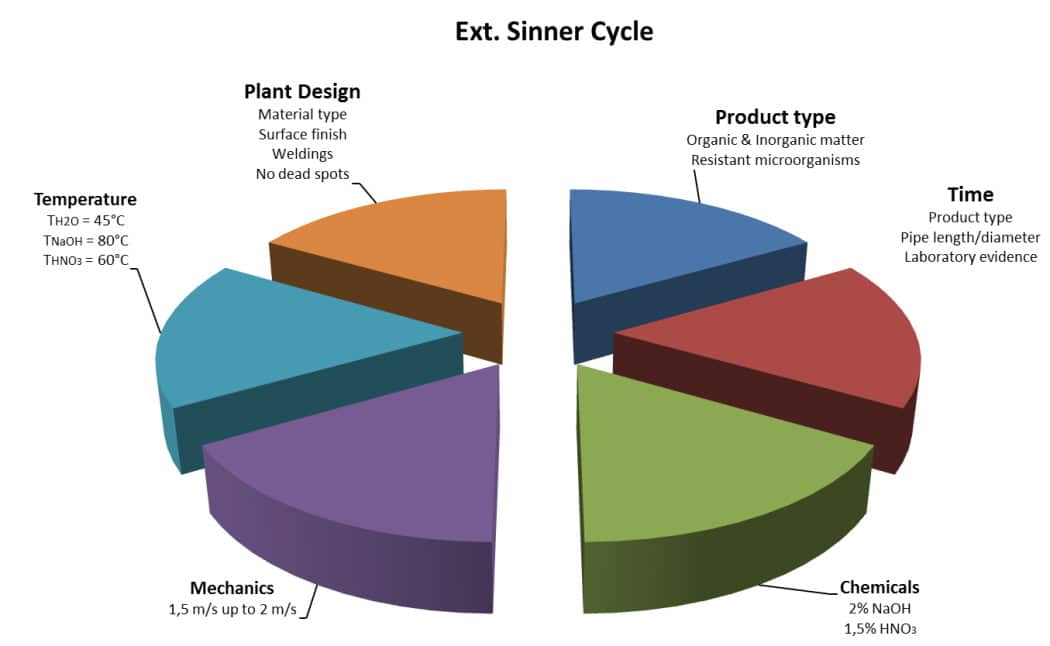 Depending on the type of the product one can stipulate the possible presence of organic and inorganic matter. The chemical cleaning media should cover the need for removal of sugar, fat, protein, mineral as well as thermo resistant and thermophilic microorganisms.

The time that a circuit has to be cleaned depends on the product type, the piping length and its diameter. There are predefined time set points for each case but laboratory evidence should also be taken into account when running the fine tuning process of adjusting the set point values.

In most cases the cleaning process can be effectively enforced with the help of water, alkaline and acid solutions enriched with surface active, calcium binding and oxidizing agents.

A properly designed production plant respecting the hygienic international standards is of the same importance as all the above parameters. Design features as the material type (stainless steel 304, 316L), the surface finish, the type of joints, weldings and couplings can form a sound design that will avoid fouling and leave no dead ends or non-drainable equipment.

A perfect example of a locally controlled CIP unit that successfully incorporates in the cleaning process all the crucial parameters is the CIPLAS developed by AS Automation System Hellas. The unit’s function is adapted to the different needs of each application and assures optimal cleaning performance for processing lines and other food industry equipment.

Another CIP pre-fabricated unit that offers centralized cleaning is CENTRASIP. A complete on one single frame based CIP unit that incorporates the base, acid and water tank. It can be designed for one or more outlet cleaning lines and is installed in facilities where the size of the production equipment requires a centralized cleaning management. Both systems are manufactured according to the latest food industry standards and can be totally customized in order to meet individual needs and specifications by choosing one or more available options.

In order to accomplish this task the CIP units have been validated in terms of design, installation and performance. Such a validated system provides the operator with the safety of hygienic construction and operation as well as all the necessary tools for full control and traceability of the cleaning functions. 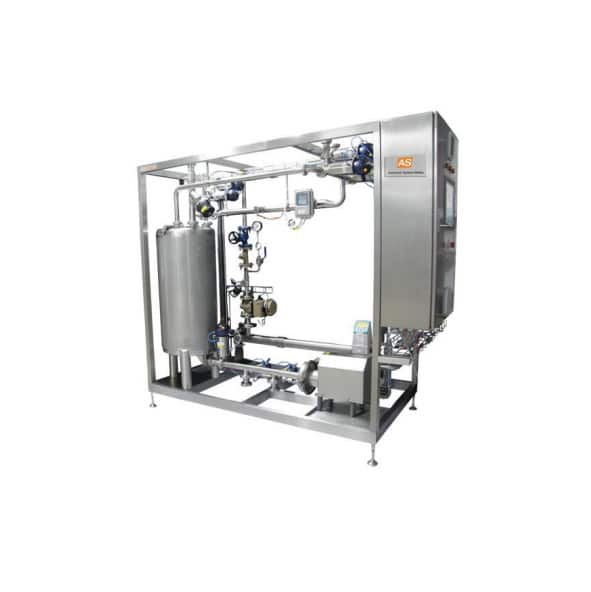 In terms of design we include all the characteristics that form the mechanical as well as the automation design. The CIPLAS unit should not be considered as a plug-n’-play machinery that works independently or blind. While being put into operation it undertakes the leading role of the plant and takes notice of all the relevant functions that run at the same time. This ability to exchange signals with other parts of the plant and to determine the simultaneously permitted or interlocked functions, is of vital importance for the safety of the product in ultimate level. The CIP program has the “intelligence” to know if a line or equipment is fouled or cleaned, when it was last cleaned and which cleaning program has been used to perform this process.

Mechanically wise, the materials being used to construct the cleaning unit have to perform a high degree of reliability as these are the backbone of the system. Correct dimensioning of the equipment and installation at the right position guarantees the prerequisites for an effective cleaning program. Sensors for the flow rate, the temperature, the conductivity are the ones that allow the fine-tuning of the system, as well as the constant reporting and decision making environment. The sensors have also to be evaluated with different importance gravity while taking actions like draining, changing cleaning phase or even interrupting the running function.

Installation is carried out by qualified personnel thus craftsmen and welders that are certified by an authorized body in pursuant to food safety standards at community or international level. The proper techniques using inert gas and pulse TIG welding method are followed in order to achieve external and internal fitting roughness that complies with the relevant food industry guidelines. Special notice is given to operator safety issues as well as maintenance access.

Cleaning of food industry process lines and equipment is an issue of balanced strategy. Different issues have to be considered and various parameters have to be controlled. It’s a matter of achieving the best cleaning results whilst controlling all the influencing parameters. CIP should not be dealt with as an isolated unit but as an element of the whole process line. In a few words, follow these steps: Understand the process, identify your needs, design and validate your CIP tool! 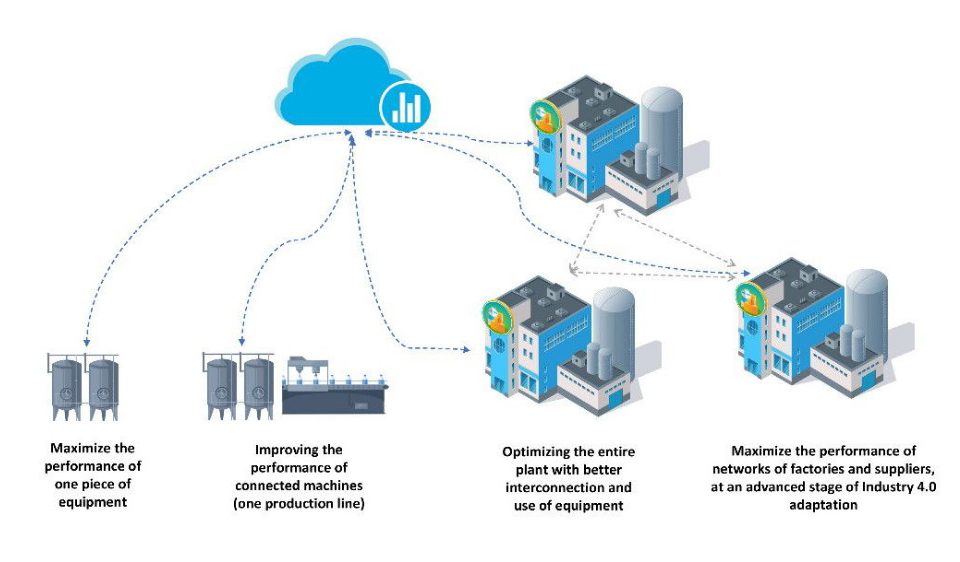 Step by step to a connected factory

Read more
We use cookies to ensure that we give you the best experience on our website. If you continue to use this site we will assume that you are happy with it.OkRead more